As many of you know, there are a couple of glitches that can freeze the game for a lot of players in this game. The biggest one is the freezing glitch on Hellfire. When triggered, it causes all the other players except for the person that caused it (or the Room Master) to freeze. While we don't know exactly what causes it, we do know that certain events cause the chances of it triggering to increase. (It may very well just be caused by lickers in general.) It is also worth noting that this glitch is NOT caused by the translation patch as testing was performed with a vanilla ISO on real PS2's, one of which was a Japanese Slim PS2.

A rarer but similar glitch also occurs during the siege of Desperate Times, but even ad-libbing excessively doesn't seem to increase the chances of it happening. It is mostly random and rare.

One final note is that the Alyssa freeze glitch is exclusive to the NA versions of the game. It doesn't occur on the Japanese version, even with the translation patch.

Feel free to also post your favorite glitches in this thread as well as reported possibly other harmful glitches.
My gaming PC specs.
Top

Great input, unfortunately i wasn't around during the mid-late 2000 when the games launched. But have been part of this community since 2015, one of the glitches that i still remember is the Lioness getting stuck below the Service Road in WT, i still remember it fondly, don't know if it was in the OG servers but i was confused when i first experienced it.


Also special mention to the Axe man not appaering during FB, i liked that not because it was easier but it gave me the sense that he was in another site doing busy things like hunting.
Top

4realz tho, I can't stand when lionesses just spawn out of nowhere lol very strange occurrence that never happened originally at this game. 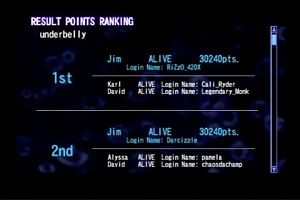 I know the main freeze was issued above, but I want to add that another major freeze can happen on "Outbreak", while Raymond is trying to break the double door with his shotgun.

Another silly glitch I've found only twice is the one on "Flashback" where Axeman will appear frozen in a room and hitting him will make his torso start rotating which each hit. It's funny, but takes away difficulty since he is harmless in that state. I don't know if this glitch is related to the servers or not.

And finally, we also have the "ghosting" bug/glitch. I don't really know much of this one, but as far as I know It happens when a player desyncs from the game and appears as "dead" to the other guys. The dead player can continue playing but they will also notice that items are being added or removed from his inventory. That happens because the other players are taking items away from the "corpse".

Apart from those, there are a couple of glitches that are not server related, that I don't know if they are worth mentioning because of it. It's good to see that these games were really well done and that they lack of glitches or bugs.
Top

I've had Raymond run out of Shotgun Shells at the doors once.
-Vote Joel Clemens for City Council

"What a weird Customer... what are you doing?!" - Will, Bartender / Cook at J's Bar, In memorial
Top

Axeman not appearing is directly related to using the translation patch, same as the "fake" Scissortail appearing in the forest at the start of the game.

I'll try to get a compilation of obscure glitch clips unrelated to netcode bugs (there are dozens of those.)
Top

I don't see how text modifications and ad-lib association could break enemy placement. Sounds like a bad ISO in general.
My gaming PC specs.
Top

It's not. I'm using the same ISO just unpatched and I've not had that scissortail spawn in 30+ flashback games since using the same raw self-ripped JP version with no english patch.

Here's a clip of me getting mauled by the fake scissor tail from Sai's PoV: https://www.twitch.tv/sairentozon7/clip ... ateePupper
Top

It could very well be caused by a desync in general. None of the RDT files were edited in any way. I also recall games in the NA version where this happened, but text edits should not yield such a result. I've not played many games on the vanilla game, but I do have memories of the early days of the server where even vanilla users saw the scissortail. It may be something to look into, though. I'll look into the patched ISO again if I ever find the time.
My gaming PC specs.
Top

It's also interesting to note that the out of bounds glitch I discovered on BFP doesn't appear to work at all on emulators.
My gaming PC specs.
Top

In File 1, Outbreak scenario, after Raymond bashes the door open using the shotgun, in the following cutscene with the zombies/scissor tails biting him, there is a considerable chance of the game freezing for the 3 off-host players or even all 4 people if they decide to watch the entire cutscene.
HN: Shepard

Useful stuff:
Get faster load speeds with the emulated HDD
Get a memcard with everything unlocked+network setup

Hello people. Someone know why (or how to do) can't to play online in 3G/4G connection?

Because here in Brazil, Rio de Janeiro, someplace haven't yet (BELIEVE ME) ADLS Ethernet Connection! So, The only connection possible is for 3G/4G! When less, a radio connection (what don't connect to server too)!
Top

I just had a glitch on Hellfire. We were at the end, near the escape ladder. My friend could use the switch to lower it and climb down, but I couldn't interact with the it at all. And on the ladder, I got the same message you get when its not lowered, despite my friend already climbing down it. I don't know what caused it. I was Alyssa and he was Yoko and we excessively ad-lib lol but idk. Couldn't complete the level with that bug
Top

I've had Raymond run out of Shotgun Shells at the doors once.

wait.... so that technicaly means, that Raymond actualy CAN run out of shotgun shells, as if he was a human player or one of those singleplayer-NPCs? O_O. On the other Hand, that doesnt mean that the Game is Softlocked, since, i am sure, the Player(s) can still use either Weapons or Bodychecks to open the Door manualy.
Top

Me and a Friend from Austria once had some sort of... dont know if thats the correct Term, but.... we had some sort of Glitch in the Matrix, were everyone (we were 4 Players in total) was playing seperate Games all of a sudden.

it was on EotR, where we had to escort that female Umbrella-Scientist to the Helicopter. Unfortunately i dont have all the Details in my Head anymore, but after a certain Cutscene near the Apple In restaurant (i think it was the one, where this arrogant UBCS-Guy threatens this skinny guy with the glasses), my Ausie-Friend reported that i seamed to have died, and he asked me, what had killed me. I checked the Status-Screen.... and was shocked to find out, that everyone (inlcuding my Friend) was dead except of me. My friend reported the same Situation, the only Difference was, that he was alive and everyone else was dead. That makes me think, that everyone was playing their own Game apparently, as if the World we played in a few seconds ago, was splitt into 4 seperate universes. In all the Years of playing Videogames online/cooperatively, i have seen many Bugs and Glitches.... but this one was completely new to me. I laughed my Ass off, while my Ausie-Friend was raging. Though the Game was spoiled at this Point, it gave me a good Laugh and a even better Time. Thank you for bringing back the Online-Service @anyone involved, it was so worth it. :3
Top
Post Reply
29 posts

Users browsing this forum: No registered users and 3 guests